Home/ Parenting/How Old Can a Baby Start to Be Given Honey?

How Old Can a Baby Start to Be Given Honey?

Admin
Kamis, 06 Agustus 2020
Facebook Twitter
Honey is a natural sweetener with a distinctive brownish yellow color. Thanks to its sweet taste and the myriad benefits behind it, honey has become a favorite for many people, including babies. However, for those of you who have babies, maybe you often wonder if it is safe if your little one is given honey from an early age? Is there a best age standard for introducing honey for babies?

When can you give honey to your baby? 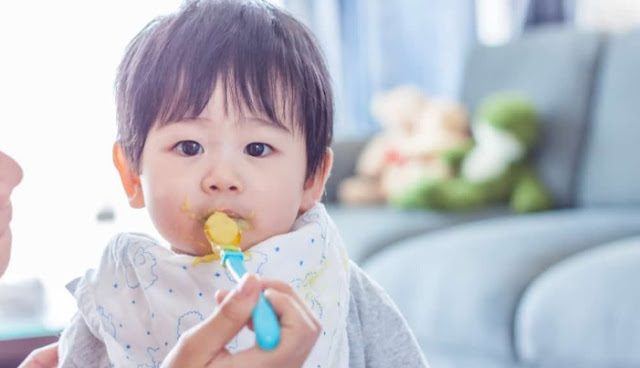 As a parent with a baby, you may need to spend more time teaching and monitoring all things related to your little one's development.

Starting from inviting him to play, teaching him to talk, paying attention to his behavior development, to introducing babies to complementary foods (ASI).

Apart from being given breast milk after 6 months of age, giving solid food can also be accompanied by infant formula milk.

Well, one of the food sources that is often asked to be given to babies is honey. This is because honey has a naturally sweet taste with a soft texture and a variety of nutrients to meet the nutritional needs of babies.

Not only that, according to the Indonesian Pediatric Association (IDAI), the decision of parents to give honey to babies is because it has several benefits.

The benefits of babies consuming honey for example can maintain body power. A baby's strong immune system can help him avoid various diseases.

On the other hand, honey is also often used as a traditional herbal medicine to relieve symptoms of cough and difficulty sleeping.

Symptoms such as coughing and difficulty sleeping are usually experienced by children with upper respiratory tract infection problems.

This has led many parents to think that honey for babies is safe to give at any age. Though the reality is not that easy.

According to the association of pediatricians in the United States, the American Academy of Pediatrics (AAP), the safest time to give honey babies is when they are 12 months or 1 year old.

The rules for giving honey to babies apply to both pure and processed honey. In addition, this rule applies not only to real honey in liquid form but also to all foods that are processed with honey.

How to introduce honey to babies?

According to the previous rule, you don't need to rush in giving honey to babies. Add honey to the baby's diet at the best time for his age.

It's best to let your little one taste a small amount of honey first as the first step in the food introduction process.

After that, try to wait approximately three to four days if you want to switch to introducing other types of new food.

The goal is that you can assess whether the baby is allergic to honey or not. If you immediately give a new type of food for several days in a row after introducing honey, the fear will create confusion.

This means that you may find it difficult to find which foods cause allergy symptoms in babies.

After your baby doesn't show any allergic symptoms, you can start giving him honey, either as food or drink.

Make sure you serve foods that can attract your baby to taste honey, for example, mixing honey with yogurt, oatmeal, smoothies, and so on.

As much as possible create a good impression for the baby's first experience eating honey. After you introduce honey to babies, there are usually two possibilities that occur.

Babies can either like them right away or reject them at first and only really like them after a few tries.

Usually, it takes about 10-15 tries to give your baby honey before concluding that he really doesn't like it.

If you don't like honey, your baby can find it difficult to eat foods that contain honey in it.

Be careful, honey is also at risk of causing disease!

It is not only feared that it can cause choking or allergies if it is given to babies less than one-year-old.

Launching from the Kids Health page, the main reason why you are not recommended to give honey to babies too early is that honey contains spores from the Clostridium botulinum bacteria.

These bacteria can live and develop in the baby's digestive system, even producing dangerous toxins and causing botulism.

The process of the occurrence of botulism in infants due to consuming honey for any purpose is because the normal flora in the baby's intestine is not yet complete.

This makes the flora in the intestine unable to compete with the spores that enter the baby's digestive tract.

The difference in acidity level or pH in the gastrointestinal tract allows the growth of Clostridium botulinum spores to enter the digestive tract.

Furthermore, these spores will collect in the large intestine and start working to produce botulinum toxin which causes disease in babies.

Babies who have botulism will show some initial symptoms including constipation or constipation, weakness, decreased baby's appetite, and seizures.

The initial symptoms of botulism usually appear within 12-36 hours of eating food contaminated with bacteria.

If you notice signs of botulism in babies, consult a doctor immediately before it's too late.

Early diagnosis can increase your baby's chances of getting the right treatment and prevent the baby from experiencing nutritional problems.

In some severe cases, botulism can interfere with breathing because it makes the muscles unable to work optimally, leading to death.

On this basis, babies are not advised to consume honey if they are less than 12 months or 1 year old.

Are there alternatives other than honey for babies less than 1-year-old?

As previously explained, honey is not recommended for babies who are not yet 12 months or 1 year old.

This aims to minimize the risk of the baby developing botulism disease ( infant botulism ). But don't worry, if you want to add natural sweeteners to your baby's food, drink, or snack, try adding fruit juice.

You can make fruit juice by squeezing or crushing fresh, ripe fruit. This fresh fruit can be chosen anything like fruit for babies that are usually given.

In addition to its delicious taste, fruit juice also contains various nutrients including vitamins for babies.

Basically, the juice has a sweet taste like the fruit so that it can be directly mixed with baby food or drinks.

However, you can also add water and sugar to the juice liquid to adjust the taste and texture based on your taste.

Although the texture and taste of the juice is very different from honey, at least the juice can help add a natural flavor to food and drinks.
Facebook Twitter